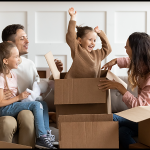 Unpacking Tips Take Out the Guesswork

There’s plenty of advice out there about packing for a cross country move, but what about unpacking tips? The internet is rife with packing tips, but what about moving in? “Unpacking” is a physical activity, but it’s also a psychological exercise. You’ll find the best unpacking starts with thinking well before acting. Anti-anxiety action The thing about unpacking that probably generates the most anxiety is not knowing where to start first. That’s why organizing is so important. Preparing for moving in really starts with the moving-out stage. Think of it as a pre-step in our unpacking tips (along with estimating... View Article